Since 1970, Native Americans have gathered at noon on Cole's Hill in Plymouth to commemorate a National Day of Mourning on the US Thanksgiving holiday. Many Native Americans do not celebrate the arrival of the Pilgrims and other European settlers. Thanksgiving day is a reminder of the genocide of millions of Native people, the theft of Native lands, and the relentless assault on Native culture. Participants in National Day of Mourning honor Native ancestors and the struggles of Native peoples to survive today. It is a day of remembrance and spiritual connection as well as a protest of the racism and oppression which Native Americans continue to experience.

Join us as we dedicate the 37th National Day of Mourning to our brother, Native political prisoner Leonard Peltier. Add your voice to the millions world-wide who demand his freedom. Help us in our struggle to create a true awareness of Native peoples and demonstrate the unity of Indigenous peoples internationally. Help shatter the untrue glass image of the Pilgrims and the unjust system based on racism, sexism, homophobia and war.
Posted by Elvert Barnes at 4:08 PM No comments:

17 November Friday's Photo of the Week Tattoos of Fort Lauderdale . November 2006
2006 Friday Photos of the Week
Posted by Elvert Barnes at 11:08 AM No comments: I first visited Bruce Bart Tattooing in November 2005 when in Fort Lauderdale. So when Richard said that he wanted to stop in a Rustica Pizza as we had last November I said that while he was ordering the pizza I would revisit Bruce Bart Tattooing as I had a little more than year ago, for the purpose of an impromptu photo session that would capture Tattoo Artists at Work.

Once inside, I'd inquire of the attendant at the front entrance if I could take similar photos as I had last year. I'd take a few shts of the attendant, Jose L. Flores, and then walk to the rear which is where I'd find Tattoo Artist Chris Slota as had been the case last year. And with his consent as ell as that of his client asked that I not photograph her face I would conduct the second installment of my ongoing documentary project that, over the years, will feature 'impromptu' images of Bruce Bart Tattooing artists at work. Which in Fort Lauderdale is located at 3323 East Oakland Park Boulevard. Telephone 954-56-1865.

Hopefully, I'll have the opportunity to revisit Bruce Bart Tatooing before returning to Washington DC later this monh.
Posted by Elvert Barnes at 6:46 PM No comments: 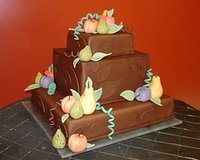 A TEXTURE, A COLOR, A FAVORITE FLOWER OR FABRIC – can all be the starting point for designing the perfect cake for your wedding, celebration, or ceremony. Whether sculpting sugar flowers to match your bouquet, making chocolate leaves to echo the time of year, or matching a favorite color, PETER BRETT will create a cake that will reflect both your style and the theme of your event.

To arrange n appointment (202) 302-3883 or email Peter@PeterBakes.com. Please include your name, contact info, the date of your event, and the number of guests you expect to attend. and the theme of your event.

Photo is the work of Kyle Walton. More images may be viewed at Peter's Bakes photo gallery or at Kyle's 'Peter's Cakes' photoset.
Posted by Elvert Barnes at 11:23 AM No comments: 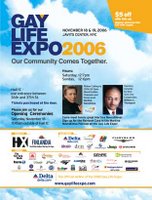 Hit the seventh annual Gay Life Expo bang on noon Saturday, and not only will you be first to see all the incredible exhibitors, vendors, information kiosks and entertainment involved, you’ll also see tennis legend Martina Navratilova cut the ribbon to launch the event. But the Expo isn’t just about over 400 exhibitors showing their support for us LGBT folk, although obviously that’s pretty damn huge. You can also find out about the best gay-friendly employers at the Job Recruitment Pavilion, or get a new baby at the Pet Adoption Pavilion.

Amani Moore, 8, chases her brother Ronald Moore, Jr., 7, behind their home in Dumfries, Va., in this March photo. White adults were more likely than black and Hispanic adults to have college degrees and to own their own homes, according to data released Tuesday by the Census Bureau. Photo credit: Nikki Kahn/Washungton Post.

WASHINGTON - Decades after the civil rights movement, racial disparities in income, education and home ownership persist and, by some measurements, are growing.

White households had incomes that were two-thirds higher than blacks and 40 percent higher than Hispanics last year, according to data released Tuesday by the Census Bureau.

White adults were also more likely than black and Hispanic adults to have college degrees and to own their own homes. They were less likely to live in poverty. Read more.
Posted by Elvert Barnes at 1:53 AM No comments:

Yellow Cake Walk in front of the White House every Saturday Every Saturday of each month, performance artist(s) Yellow Cake Walk demonstrates against the Bush/Cheney administration in front of the White House at 1600 Pennsylvania Avenue in NW WDC. As was the case on Veterans Day Saturday afternoon, 11 November 2006 which is when this picture was taken.
Posted by Elvert Barnes at 8:32 PM No comments:

A Martin Luther King, Jr. National Memorial groundbreaking ceremony will be held from 9a until 12n today, 13 November 2006 on the National Mall @ Independence Avenue & West Basin Drive, in SW, WDC. For info visit www.buildthedream.org.
Posted by Elvert Barnes at 1:02 AM No comments: It being Veterans Day my ritual is to visit the Vietnam War Veterans Memorial. After having first stopped in at the Robert Cole Studio in support of the Mid City Artists Open Studios fall campaign, en route to The Wall, I'd walk south on 15th Street in the direction of McPherson Square Park with hopes of getting some fall 2006 shots of Lafayette Park and The White House before converging onto Vietnam Veterans Memorial.

Since the spring of this year whenever I pass the the intersection of 15th and K, NW, I take a series of photos in a similar way that I capture pedestrian traffic at various locations in WDC.

Standing at the northeast corner of 15th and K, waiting for the traffic light to change, and while looking south into McPherson Square Park, I'd hear a 'bang' as if two cars had collided but the sound was more muffled than metal. I'd turn to my right, looking west along K Street, and observed that a peice of furniture had fallen from a vehicle into the center of the street.

It being a moment in time that can not ever be again, I take my first photo of the incident at 15th and K streets, NW, Washington DC

Turning around to look behind me, since I had heard the slamming of two doors, I'd observe two young males running toward the wooden piece of furniture. And parked directly benind me on 15th Street, north of K Street and McPherson Square Park, was a red pick-up truck filled with the back filled with furniture.

While snapping pictures of the incident at 15th and K Street, NW, I'd reflect on the focus of my photography which is to capture moments in time that can not, possibly, ever be again! This, certainly, was such a moment.

Wanting to get to The Wall before too late in the afternoon concerned that one the sun begins to go down the chill that then fills the air will cause the bones in my left knee to ache, making it difficult for me walk or to bend my knee, I'd continue on my 11 November 2006 Saturday Photo Walk ...
Posted by Elvert Barnes at 6:58 PM No comments: