Venue Change for Champions (Dance on the Pier Afterparty) 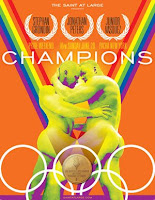 The Saint-At-Large announces that CHAMPIONS: The Official Afterparty of Dance on the Pier benefiting HERITAGE OF PRIDE will now be held at one of New York's most spectacular venues, THE CAPITALE.

Click image for details.
Posted by Elvert Barnes at 8:32 PM No comments: Since having heard Melange Lavonne at the 15 June 2008 Capital Pride Festival the voice, the lyrics, the activism and the beauty of the Lesbian Hip Hop artist has been on my mind.

And reverberating in my head!

While I do not have the time, right now, to delve into the impression that she has made upon me ... since the purpose of this posting is to provide you with links to various videos and images that I shot of Melange Lavonne performing at the Main Stage during the 2008 Capital Pride Festival, hopefully, I'll find the time later to give her a proper review.

Metro Weekly's 5 June 2008 article Mixing It Up by Doug Rule sheds light on her story.

In addition to writing songs, dabbling in music production and touring with HomoRevolution 2008, Melange has also done some modeling and acting and is attending school, majoring in graphic design with a minor in business marketing.

Having released her first cd, Melange, in 2006 ... her sophomore effort, The Movement, which I believe was released in April 2008 ... is receiving raved reviews.

I am almost certain that once you hear her music and listen to her lyrics or witness her performance ... you, too, will not be able to 'get Melange Lavonne out of your head'.

And like so many others, including me ... wishing and hoping for her next project. When leaving the Opry House Tent on Wednesday, 25 June 2008, and after having just captured Texas Johnny Brown & the Quality Blues Band and Los Texmaniacs a man named Sidney who along with many others I have documented many times over the years dancing at the Smithsonian Folklife Festival walked up to me and thanked me for the images and videos (some depicting him) that I posted on Flickr, You Tube and Google Video from the 2006 and 2007 Smithsonian Folklife Festival.

To my delight, I thoroughly enjoyed myself as I captured folks dancing to the Gulf Texas region music of the Les Amis Creole Trio from Beaumont, Texas.

Led by veteran fiddler and accordionist Ed Poullard, this trio ... includes James Adams and Lawrence Ardoin ... draws its inspiration from old-style French songs of the upper Gulf Coast. They expertly play and preserve a traditional repertoire of waltzes, ballads, and two-steps. Featuring the acoustic interplay of diatonic accordion, fiddle, guitar, and voice, their music is homemade, with an Afro-French twist.

I throughly enjoyed myself until when at the conclusion of their performance that, another white person approached me the way white people do "... when they see black men ..." and started to rant something about unless I had press credentials that, perhaps, I should not be video-taping.

And though I observe many white people and Asians with all kinds of cameras and video-recorders seldom is there a time that white folks and sometimes Asians do not approach me the exact same way as did that white man.

As a 50 something black man who, over the years, practiced integration and who experience the racsim everywhere that I've gone I turned and said "White man, please. I'm 54 ... years old. You don't tell me what I can or can not do!"

After that incident at the Dancehall, I headed home and in continued to document Washington DC, from the perspective of a black man, by focusing on several ongoing projects, including the VRE L'Enfant Station, the Southwest Federal Center - 7th Street, SW, the Marcel Breuer designed HUD Building and a view of the 14th Street Rush Hour Traffic from the 7th Street, SW, overpass.

Since having first seen on TV in the summer of 2001 Gordon Parks' "Solomon Northup's Odyssey - Twelve Years a Slave" when ever I now see a fiddler as was the case on Wednesday, 25 June 2008, that I captured the Les Amis Creole Trio ... I can not help but reflect on my experiences and those of Soloman Northrup.

Here are the videos that I shot of the Les Amis Creole Trio during my 25 June 2008 visit to the 2008 Smithsonian Folklife Festival.

Posted by Elvert Barnes at 8:13 AM No comments:

Another excellent group of Texas entertainers that you do not want to miss at this year's 42nd Annual Smithsonian Folklife Festival are the Los Texmaniacs, from San Antionio, TX.

The following are videos that I shot of Los Texmaniacs during my 25 June 2008 visit to the 2008 Smithsonian Folklife Festival.

Posted by Elvert Barnes at 5:17 AM No comments: The first act that I had the pleasure of capturing on the Wednesday afternoon, 25 June 2008 during Opening Day of the 42nd Annual Smithsonian Folklfe Festival was Texas Johnny Brown and the Quality Blues Band who, upon my arrival was performing on the Opry House Stage's 2 - 3 pm set.

Though I'm seriously contemplating featuring my 2008 Smithsonian Folklife Festival to my recently launched ipernity account, for now, here is my Texas Johnny Brown & the Quality Blues Band photoset at Flickr.

Then too, though it has been one of ongoing projects since 1993 I am SERIOUSLY CONTEMPLATING NOT RETURNING TO THE 2008 SMITHSONIAN FOLKLIFE FESTIVAL this year as a result the racism that I experience each and every time that white people see black men ...

As a 50 something black man who, over the years, practiced integration ... I'm sick and tired ...!
Posted by Elvert Barnes at 2:21 AM No comments: 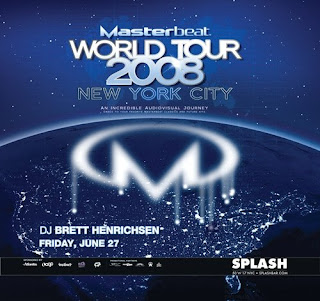 Posted by Elvert Barnes at 11:30 PM No comments: 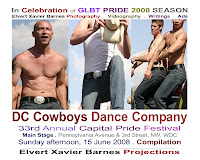 Rebecca Armendariz of The Wash Blade Blog reports that TONIGHT's preview of 'America's Got Talent' new season will feature clips of the DC Cowboys audition session.

FUNKIN' IT UP at Baltimore's Pride Block Party My third time for checking out the Baltimore Pride one of the artists that more than caught my attention at the Baltimore Pride 2008 Saturday Block Party was DJ Alex Funk. Who while spinnin' from the Dance Tent at the corner of Cathedral and Eager Streets managed to 'funk up' the crowd with unique mixes of gay anthems, old school soul, some rhythm and blues, a little rock and roll smashed against electronic techno.

Though I have a few more photos to upload of DJ Alex Funk performing at the 2008 Baltimore Pride here is video #1/2 and #2/2 of Alex funkin' up the crowd from the Dance Tent during Saturday's Block Party.

To learn more about DJ Alex Funk visit his website or myspace. Having just finished two busy weeks, in addition to regular appearances at Club Hippo, you can catch him at the Red Maple on Thursdays (gay boys and top 40 remix) and Fridays (international staight crowd and electro/latin/2step).

Here are my 33rd Annual Baltimore Pride and 2008 GLBT Pride Season webpages.
Posted by Elvert Barnes at 9:02 PM No comments:

Posted by Elvert Barnes at 5:10 PM No comments: 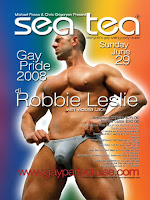 Sunday, 29 June 2008's CRUISE 2: THE LATIN CRUISE, co-Hosted by Club Atlantis, sailing on The Star of Palm Beach, featuring DJ Eddie Cruz. $25 in advance / $30 at the gate. Advance Tickets for the Latin Cruise only available from Club Atlantis.
Posted by Elvert Barnes at 4:29 AM No comments: