Tune in to A&E on Monday for Kings of South Beach!

An action-packed film of mobsters, money and murder, Kings of South Beach is based on a true story detailing the club promoter who reinvented South Beach as a nightlife Mecca.From the writer of Goodfellas and Casino and produced by Sonny Grosso, former NYPD detective, this upcoming A&E Original Movie premiers on Monday, March 12th at 9pm EST. Tune in!

excerpted from the NLEOMF E News dated 8 March 2007.
Posted by Elvert Barnes at 7:07 AM No comments: 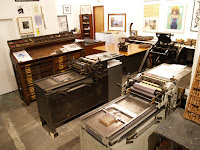 Last week I reported that beginning 13 March 2007 new Letterpress Classes would be offered at Union Printmakers Atelier in DC. Which at ten (10) sessions for $400 the classes would take place each Tuesday and Thursday from 10 AM to 1 PM.

I learned earliered today, that an additional class time has been scheduled for Sunday, 2-5pm.

Please call for Instructor STUART BRADLEY for clarification at 703-683-2335. And Behind the Wall featuring: 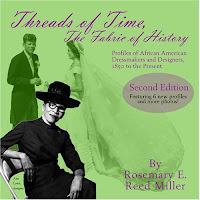 Innovative Black-American Designers: Their Struggles and Achievements Panel Discussion at the Museum of the City of New York
Sunday, March 18 • 2:00 PM

Rosemary E. Reed Miller, author of The Threads of Time, The Fabric of History: Profiles of African-American Dressmakers and Designers from 1850 to the Present (Toast and Strawberries Press, 2003) will moderate a lively panel discussion that highlights the travails and accomplishments of black designers. She will be joined by Sara Penn, owner of the renowned Knobkerry in Soho; Xenobia Bailey, noted fiber and crafts artist; and Princess Jenkins, owner of Harlem’s famous Brownstone Boutique. There will also be an informal fashion show that features their innovative designs.

Participate in the Redesign of Tysons Corner!

Planners are seeking your input on the redesign of Tysons Corner. This is your opportunity to share your opinions and help establish the framework for the coming changes. Attend one of the public workshops.

To participate or for more information contact Lauren or Rebecca at (202) 244-4408 or email info@smartergrowth.net

Redesigning of Tysons Corner is only one of many such projects that the Coalition for Smarter Growth is involved in.
Posted by Elvert Barnes at 6:42 AM No comments:

If YOU ARE in Miami Beach YOU should EAT at CAFETERIA ... Arriving at Miami Beach a little after 11:30 am on Friday morning we had a little more than a 1/2 before the Winter Party Welcoming Center opened. With one and 1/2 hour on the parking meeting we decided to grab a quick bite first and then return to the Welcoming Center to pick up my ticket and press credentials.

We took a walk to the plaza on Lincoln Road and found a very inviting place, at 546 Lincoln Road called Cafeteria.

After a quick glance at the menu, when the host asked "... inside or out?" we said "Inside". It was already hot, outside. Richard and I both were impressed with the decor and atmosphere. And the prices posted to the menu weren't bad either.

When our young handsome waiter asked what we were drinking I ordered a cranberry juice with ginger ale. Richard ordered an ice-tea. When the waiter returned, within a short amount of time, Richard ordered a Grilled Chicken Club consisting of bacon, avocado, arugula, tomato, red onion and mayo. I ordered the Meatloaf Sandwich with arugula and red onion on toast.

Waiting for our meal to arrive we flipped through the March 2007 issue of HOME / MIAMI and marvelled at the architectural photos and commented on the featured food article on artichoke.

Some time had past before I asked Richard should one of us return to the car to add more money to the meter since it appeared that the service was a bit slow.

It is not that the wait service was slow because our waiter was very attentive. But having observed that food orders had not yet arrived for several tables that had been seated before our arrival we were concerned that our metered time would expire at, 12:35 pm, before we finished our meal. Assuming that our plates would arrive soon.

When the meal had not yet arrived, at 12:30 pm, I ran to the parking lot, which was just one block south and inserted more money - allowing us until 1:45 pm.

Plenty of time for us to eat as well as pick up my event material from the Welcoming Center.

When I returned, about five minutes later, the food had not yet arrived. We waited for at least, 10 to 15 minutes more, before a second waiter delivered or plates.

Both were nicely displayed, Richard commented that his Grilled Chicken Club may would be too much to finish. Which was only one of my concerns with my Meatloaf Sandwich, since in recent months I sometimes have experienced difficulty in swallowing some foods. In particular, toasted bread.

Which is exactly what my meatloaf was sandwiched between. Fortunately, I had little problems with indigestion on this particular occasion.

Not only were Richard and I, both, very pleased with our sandwiches but, also, highly recommend that if YOU ARE in Miami Beach ... YOU should definitely EAT at the Cafeteria at 546 Lincoln Road.

As long as you have a lot of time on your hands!

The decor and atmosphere are quite pleasing, in an industrial sort of way ... and along with the prices ... the 'eye candy' passing through and around the Cafeteria 'ain't bad either.'
Posted by Elvert Barnes at 3:06 AM No comments: