As the first DJ to mix a benefit CD for a charitable circuit party event, The White Party / Miami, Centaur is thrilled to announce that David Knapp will once again mix the Official White Party CD with Centaur for the 2008 White Party Week taking place this November.

A staple on the White Party Week schedule for many years over the past few decades, David is excited to return to the tea dance party at Amnesia during White Party Week. His new White Party mix will be available in late November (including iTunes) and will once again benefit Care Resource. Jogger on Barracks Row in the Captiol Hill Historic District
8th Street between G and I Street, SE, WDC
Monday afternoon, 22 September 2008
A 2008 Fridays' Photos of the Week
Posted by Elvert Barnes at 9:15 AM No comments:

Though still in negotiations and planning stages ... Jim Lucio, aka Defekto, will soon launch the weekly or bi-weekly TRANS-AM PARTY at the Zodiac in Baltimore.

Lucio says "What I really want to happen with this party is to bring back the social aspect of going out and meeting friends and new people as well as to host music, performance and of course, to offer a comfortable home to all of my trans friends and anyone else looking for an alternative to your typical "dj night."

Click the image to read the entire Thursday, 25 September 2008 E-News which provides details regarding Jim Lucio's TRANS-AM Party.
Posted by Elvert Barnes at 3:25 PM No comments: Though I have quite a few more photographs to upload of the Joe Falero & the DC Latin Jazz All Stars performance at the Music Stage during the 16th Annual Arts on Foot which took place in the Penn Quarter area of NW Washington DC on Saturday, 13 September 2008, here are the six videos that I shot:

Check the Status of the Fire Hydrants in Your Neighborhood When at the start of my First Day of Autumn 22 September 2008 photowalk that I observed a Maintenance Required tag around this fire hydrant in the 300 block of N Street it caught my attention because it was the first time that I had seen a tag on any fire hydrant.

Well, thanks to the Living in the District blog I learn that in the process of a recent fire hydrant inspection campaign to upgrade all fire hydrants in the city ... you can now check the status of each hydrant in your neighborhood.

One of two hydrants in the 300 block of N Street, SW, Fire Hydrant Stats reports that hydrant #H07323 was last inspected on 5 July 2007 and though IN SERVICE the tag infers MAINTENANCE is REQUIRED.
Posted by Elvert Barnes at 7:04 AM No comments: 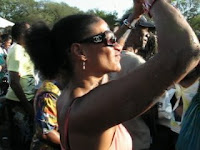 Even if it had not been so crowded that I could not get close to the stage to get better footage of Fantasia's performance during the NCNW 23rd Annual Black Family Reunion it is always my practice when documenting thee kind of events to focus more on the crowd.

Here are the videos that I shot at the Sunday evening, 7 September 2008 Gospel Concert of Fantasia's electrifying performance during the NCNW 23rd BFRC on the National Mall.

Posted by Elvert Barnes at 7:47 AM No comments:

I Spent Last Weekend With ... 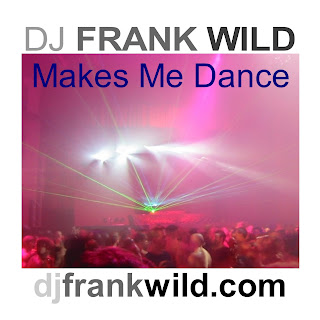 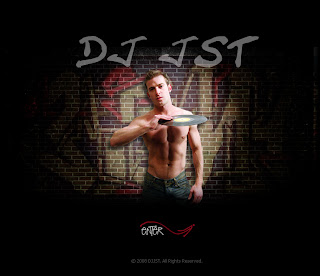 Though I had planned to take a ritual Friday Night /WDC photo /video walk since I wanted to put the final touches on my September 2007 NYC - IN SEARCH OF THE SUN video /dvd projections project which had been in development for a year - I stayed in and THANKS TO JustCircuit.com/Music I spent last weekend with DJ Frank Wild and DJ JST.
In fact, in recent months, it has been over the weekend that I have spent much of time listening to the ever growing list of DJs featured at JustCircuit.com/Music.
It is for this reason and in attempt to bring attention to these and other progressive and cutting edge djs that I launch the new but now ongoing "I Spent Last Night With ..." or "I Spent Last Weekend With ..." series.
Having already listened to the music of many of the DJs listed at JustCircuit.com/Music I searched the list for those that I had not observed or listened to before.
Let me start by saying that I regard DJs as one of the most underrated professions and art forms in the world. And when I listen to a mix by a particular DJ I try to 'step into his / her world' and 'allow them to take me onto a journey' that if you JUST LISTEN that in most cases will shed light on their personal story. Or perspective of the world.
One such DJ that I became acquanited with through JustCircuit.com/Music a couple of weeks, or so, ago and that I wanted to blog about but have not yet done so is DJ Conspiracy. Not only did his compliations throw me up against wall but the artwork that he creates for each mix with track listing deserves much attention, as well.
I always appreciate it when a DJ provides track listing and artwork for his/her compliation. You can tell a lot about a DJ who goes that extra mile. And while I now do not now recall wihch weekend it was that after first listening to the music of DJ Conspiracy and then revisiting the work of DJ Herbie James ... it has been since then that I have contemplated the launching of "I Spent Last Night / Weekend With ...".
And it has been since that weekend that I often revisited the music of DJ Conspiracy and DJ Herbie James. And while DJ Conspiracy's mixes throw up against the wall and have me wanting for more ... a bit older and wiser Herbie James' mixes are nothing short of mind fucks and musical journies!
And while I have not found track listings nor artwork for his music his blog and podsite are of equal historic importance and tells a lot about the man as does the artwork of many of the younger DJs.
So, I'd like to apologize to those JustCircuit.com/Music DJs who in the past month or so that I spent the night or weekend with but have not yet blogged about but, rest asure, when time permits - I will.
After spending late Friday night / early Saturday morning listening to DJ Frank Wild's Makes Me Dance (and sometimes dancing around the apartment) I was so circuited up but with no where to go ... while putting the final touches on my September 2007 NYC project ... I spent the rest of Saturday and much of Sunday listening to six mixes by DJ ST.
After spending last weekend dancing with DJ Frank Wild and being mind-fucked by DJ ST I'll being going back for more.
Thanks to JustCircuit.com/Music I don't even have to leave my front door.
Posted by Elvert Barnes at 8:22 AM No comments: 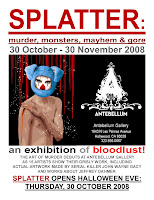 The grisly work of 15 artists will be featured, including actual artwork made by serial killer John Wayne Gacy and work about Jeffrey Dahmer.

SPLATTER opens at the Antebellum Gallery in Hollywood (LA) on Halloween eve, 30 October 2008. Private press preview from 6 till 7 pm. General public from 7 until 10 pm.

Live performances by Citizen Savant, Botoxic and Kevin Delude. $10 cover. $5, if in costume!

Plan to be there, even if it kills you!
Posted by Elvert Barnes at 3:02 AM No comments:

Known mostly for her photography when Dalila of RockStarPix and her hubby of just one year attended the Saturday, 20 September 2008 MOTORHEAD show at Roseland Ballroom / NYC instead of shooting pic she shot some historic video footage.

As a documentary photographer who enjoys shooting both I can appreciate her delimna!

Click the image above to read Dalila / RockStarPix E-News dated Monday, 22 September 2008 regarding her videography of the 20 September 2008 MOTORHEAD show at Roseland in NYC.
Posted by Elvert Barnes at 6:39 AM No comments: