Artist Quest Skinner, who exhibits at Eastern Market's Sunday and Saturday Market Festival, an Arts & Crafts Fair is featured on the cover of this Sunday's Washington Post Source Magazine, dated 30 March 2008, as staff writer Dan Zak explores "Art on a Budget The Secret to Starting a Great Art Collection? It's Not a Fat Bank Account".

An art teacher for three area community centers, price ranging from $20 to $200 to the thousands, 30 year old Quest's "tips" can be found on page 2 of the article.

Painter Quest Skinner, who I have sometimes captured at Eastern Market says that "... discounts will be given to all who bring the article to Eastern Market on Sunday between the hours of 9am and 5pm".

Quest can be found at Eastern Market on Saturdays and Sundays. Or visit her at myspace. Email at questskinner636@hotmail.com. Or call 202-415-6684.

Click the above photo by Juana Arias of The Washington Post t oread the entire article.
Posted by Elvert Barnes at 11:31 PM 3 comments: 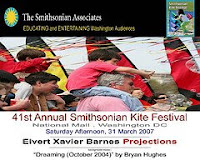 Posted by Elvert Barnes at 9:56 AM No comments: 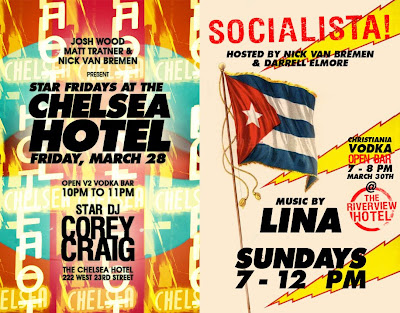 Posted by Elvert Barnes at 9:39 AM No comments: Celebrating its 48th anniversary, Jane Haslem Gallery will host an open house on Saturday afternoon, 29 March from 1 until 5 pm.

Two current exhibits will be on display as well as selections from the gallery's paintings and prints & drawings inventory.

Posted by Elvert Barnes at 8:13 PM No comments: 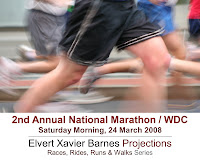 In celebration of next weekend's 3rd Annual National Marathon, it had been my intention to create a never before seen photo montage / video of last year's 2nd National Marathon featuring DJ Bryan Hughes "In Search of the Sun (Snowboarders Mix)" as background music but, when a few weeks ago that my Simple Tech external hard drive 'corrupted' all the data includig a photography archive from, at least, October 2005 through June 2006 and correspondence and wrtings dating back 2004 or 2003 ... that plan, along with many others, when out the window. Or down the drain!

Thanks to my 2nd National Marathon collection I was able to create this 2nd Annual National Marathon / WDC - 24 March 2007 photo montage from images that I had already uploaded to my flickr account. Unfortunately, the remaining 500 or images that were 'corrupted' will not now ever be seen!

Too bad, because they were some great images shot in SW DC along 7th Street, Maine Avenue and M Street. And put to Bryan Hughes uplifting 'In Search of the Sun (September 2007) mix would've resulted in a empowering reflection of last year's National Marathon!
Posted by Elvert Barnes at 5:44 AM No comments:

Easter Does Not Mean To Me ... For much of my life, the celebration of Easter and spring were one of my favorite times of the year. However, when in recent years that I have reflected on the past and, more importantly, attempted to move forward ... EASTER HAS NOT MEANT TO ME ...

As I now prepare for 'the end of my life', the image, shot in Dupont Circle on Easter Sunday, 10 April 2006, ranks as one of my favorite Easter images.

When a few weeks ago I learned that my Simple Tech external hard drive containing much my digital photography from October 2005 through June 2007 (including the above image) and correspondence, writings and other important data dating back to 2004 could not be viewed on my computer and may have been deleted ... I flashed back to 'scenarios' in the past when something of value to me had been destroyed or dismantled by someone in my life.

And that the 'dismantling of the lives of black men', at least from experiences, have been foundation for the weatlh of many.

Hoping that the historic data could be retrieved, when visiting Fort Lauderdale in early March, I took the hard drive down with me and left it at Best Buy's Geek Squad. When checking with Best Buy on the morning of my departure that I was informed me the data had been lost, while, I certainly was disappointed, after my experiences of the previous week, the 'lost data' not only did not mean to me what it had meant, just a few days before but, and not unlike when one's last breath is exhaled, though the lost was still felt, the news from Best Buy, representing 'a sign' to 'move on' came as 'sigh of relieve'!

While the lost images represent only a few years of the past 15 years, what is more important, is the fact that whenever I revisit any of the images taken between 1992 and 2007 and not unlike Ken Wyban when he revisits images that I took of his last days at 21 N Street, SE, or that revisit places that I once lived or frequented or that encounter people that I have known, over the years, haunting memories flash before me.

However, Mr. Wyban was compensated. I, a 50 something black male, was not. Nor will I ever be able to regain nor recover what what 'dismantled' from me. It is not able the pictures nor the external hard drive.

If the past 15 years of institutionalized racism has been enough, you know God Damn well that more than 30 years of being targeted and blacklisted by the US Government and the law enforcement community, is more than enough!
Posted by Elvert Barnes at 5:52 AM No comments: