Video compilation of the Rick Bauer Band performing at the Village Grille / Village Pump's "Jazz On The Square" at Pelican Square in the Anglin Village area of Lauderdale By The Sea, FL on Friday night, 7 March 2008.

Posted by Elvert Barnes at 9:28 AM No comments:

Posted by Elvert Barnes at 12:13 AM No comments: 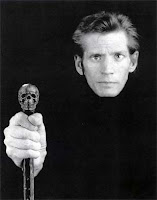 This always happens. While, it is true that he often crosses my mind as was the case a week or so ago when I received an update from the Saint pertaining this year's Black Party, on this particular day, he was not.

When in the process of selecting today's Friday's Photo of the Week that, in the background, I listened to Martha Stewart's Friday 21 March 2008 Easter Show I realized that I was not focusing on Easter nor Spring as I had in the past.

And then, it happened. As it has ... each and every vernal equinox, since 1999, when ten years after his death that I remembered the morning of 22 March 1987 when Robert Mapplethorpe predicted that "... years from now, you come to realize that you were just their nigger ..."
Posted by Elvert Barnes at 8:13 AM No comments: