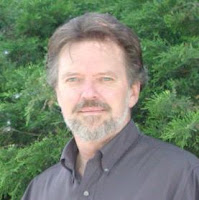 In celebration of GLBT Pride 2008 celebration I'd like to bring your attention to a most unique author by the name of Martin Brandt whose website I'd come across last week.

Born on the banks of the Amazon River and raised by a Kaiapo wet-nurse while his mother conducted medical research and taught the Kaiapo children how to play the violin, Brandt studied rocket science at the University of Uganda before making his home in America.

Married to a tall blonde woman who he considers as his soul mate, Brandt's 'fictional' writings while reflecting on such taboo subject matters as 'male bonding and male sexuality' also, powerly, explores the issue of bi-sexuality.

Published in June 2006, 'FIVE MARRIED MEN', a tale for anyone intrigued by the intensity and emotions of male sexuality, explores what may cause some men to risk their career and a marriage for the magic of an intimate bond with another man. Read Chapter One and Two. Here are some reviews.

Published one year later in June 2007, THE PARTISANS takes place in France during World War II and in this time of fear and oppression, and the Holocaust, the story follows a few weeks of the lives of black American Ethan Jones and French Adrienne Follett, members of the French resistance, and German defector Jhan. Read Chapter One and Two.

First published in 2005, the revised edition of A SONG IN THE PARK scheduled for an August 2008 release, is the fictional story of renowned San Diego surgeon Michael Anderson who after losing a little girl on the operating table would cross paths with Justin Brooks, a Park Ranger at Big Bend Park, who had left his bride-to-be standing at the altar. It is a celebration of human diversity and a discovery that it is the simple things in life that matter the most.

Available in December 2008, THE STRANGE HAUTNING OF JOHNNY FEELWATER is a haunting story of a man named Johnny Feelwater who having inherited an old house on Confederate Square in historic Savannah, realized, once he stepped through the door, that his life would never be same ... when Cassandra Mott, the old DEAD lady who had left him the house ... returned FROM THE DEAD as a beautiful young seductress, to begin life again at age twenty-six. Read Chapter One and Two.

Here are some of the IMAGES and ART in Martin Brandt's collection. To learn more about Martin Brandt read his biography and this recent interview.

Since receiving a printed copy of Just Circuit Mag "Summer Heats Up" June/July 2008 Issue in the mail the other day I've wanted to bring to your attention Mickey Weems' SHUT UP AND DANCE page 30 - 33 article "It All Started On April 8, 2008" in opposition Brett Henrichsen's Masterbeat World Tour stop at Town in DC during the Cherry Weekend.

And here is a pdf of page 18 which is the first page of Entertainer Editor John Kater's DJ of the Year feature on DJ / Producer Randy Bettis.

The June through October 2008 calendar begins on page 74.

Though always available FREE ONLINE, to have your copies delivered right to your door, and receive a free Centaur Music CD valued at $20, CLICK HERE.
Posted by Elvert Barnes at 7:19 PM No comments:

Posted by Elvert Barnes at 6:46 PM No comments: Town is a sponsor of Capital Pride and is hosting multiple Pride events! Proceeds from these events are going to Capital Pride!!
Posted by Elvert Barnes at 8:01 PM No comments: 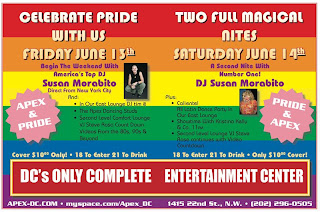 Celebrate the 2008 Capital Pride Weekend at the APEX when America's top DJ Susan Morabito will spin on Friday and Saturday nights, 13 - 14 June.

Posted by Elvert Barnes at 7:02 PM No comments: 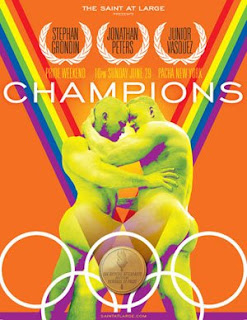 Posted by Elvert Barnes at 4:22 PM No comments: