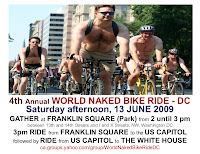 If all goes as planned, beginning at 2pm, the 4th Annual WORLD NAKED BIKE RIDE-DC will gather at Franklin Square Park between 13th and 14th Streets and I and K Streets in NW Washington DC for a 3pm RIDE from Franklin Square to the US Capitol.

While the WNBR-DC.org website is not now available visit the World Naked Bike Ride - DC yahoo groups for updates. 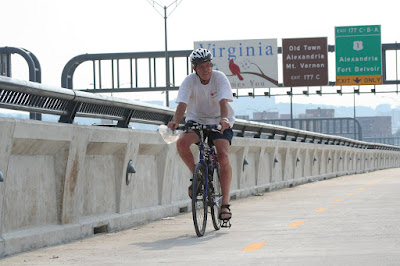 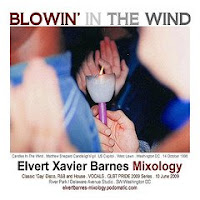 Let me start with a shout out to JustCircuit.MAG contributor Mickey Weems who's recent "Fly-Over Land" feature in the June/July 2009 issue of JustCircuit.MAG ... is a must read for those who produce compilations or podcasts for gay circuit events or gay music lovers.

I, too, believe that it is important to include not only new and fresh music but also selections and/or remixes from the past.

When completed, my GLBT PRIDE 2009 series will include 5 compilations.

While a copy of the first installment, FREEDOM TO LOVE was dropped off at the DC Eagle last Saturday night, final touches on the second installment, STRANGE FRUIT was not completed until Sunday.

Opening with "Runaway Love" by Linda Clifford and featuring Etta James' BLOWIN' IN THE WIND as the title song ... the third installment of the GLBT PRIDE 2009 SERIES ... which includes old 'classic' as well as new favorite 'gay' VOCALS will be dropped off at the DC Eagle later tonight in celebration of the Captial Pride 2009 weekend.

While the 4th installment which should be completed by next weekend's Baltimore Pride will also highlight vocals, the 5th and final installment, featuring trance and new age, will be in time for the NYC Pride celebration.

Click the cd cover to listen to and/or download my June 2009 BLOWIN' IN THE WIND (Vocals) Gay Pride Mix podcast.

The image used on the cd cover was taken by me during the 14 October 1998 Matthew Shepard Candlelight Vigil at the US Capitol's West Lawn.
Posted by Elvert Barnes at 3:16 AM No comments: 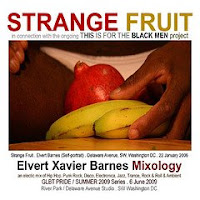 The second installment of my GLBT Pride 2009 series, and in connection with my ongoing "This Is For The Black Men Who Contemplated Suicide When That Rainbow Was Just Too Much!", the STRANGE FRUIT (June 2009) compilation represents more of a commemoration as opposed to a celebration of GLBT Pride.

Not unlike a protest vs a party.

Giving voice to those black men, many which are now dead, who while practicing integration experienced forms of institutionalized racism, even when dancing at the clubs or sharing homes/beds, that were socially designed to be very different than that of their gay white partners.

Patti Smith's album "Gone Again" has always been amongst my favorite. And while I do not know Patti Smith on a personal level, Robert Mapplethorpe and I were more than just 'fuck buddies'. Several tracks from "Gone Again", as tributes to Mapplethorpe, serve as haunting but perfect selections for STRANGE FRUIT.

The two most important tracks in the STRANGE FRUIT June 2009 mix are "Killing Me Softly With His Song" by The Fugees and "Strange Fruit" by Laika Fallen.

Click the cd cover to listen to and/or download the podcast which just under 80 mintues may be burned to a cd.

After more than 40 years of integration ... GLBT PRIDE is NOT A CELEBRATION NOR PARTY for me. It is a commemoration and a protest!
Posted by Elvert Barnes at 4:22 AM No comments: 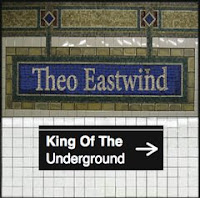 Click KING OF THE UNDERGROUND album/cd cover to read Theo Eastwind's Newsletter dated Sunday, 7 June 2009.
Posted by Elvert Barnes at 3:33 AM No comments: